The Skinny on Tax Reform and Action Plan 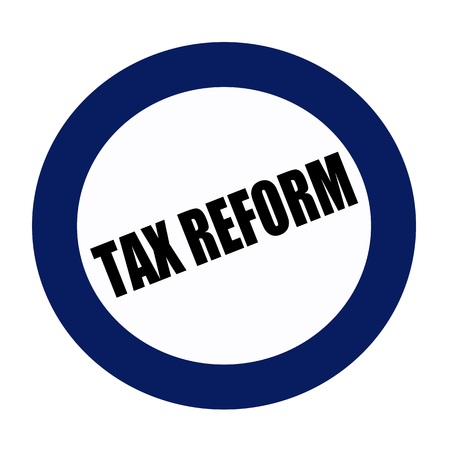 WHAT TO DO BEFORE YEAR-END

*Note: Many are advocating to prepay 2018 state income and real estate tax liabilities. However, the tax bill notes state income tax prepayment (doesn’t mention real estate tax) is disallowed. In addition, existing tax law doesn’t allow a tax deduction for prepayment of any subsequent year tax liability. It is difficult for the IRS to police, but it is the law. You CAN pay your 2017 tax liabilities before year-end without running afoul of Uncle Sam’s rules.

With no spin! (see the last section below). The new tax law definitely simplifies the tax code, except for the new 20% business deduction. I am not sure how they could have written the 20% business deduction portion without complexities. If they didn’t add in layers of limitations, then it would have created a lot of loopholes and unintended consequences. Simplifications include a higher standard deduction which will lead to significantly fewer taxpayers itemizing, no personal exemptions, higher Alternative Minimum Tax (AMT) exemption (significantly fewer taxpayers will pay), elimination of many deduction and credit phase-outs as well as increase in phase-out amounts to exclude middle income taxpayers.

A worthy goal to have most taxpayers file their own tax return on a form the size of a post card without spending hundreds of dollars on tax preparation. We have moved toward that reality. Most taxpayers will have very simple tax returns. However, some upper income earners and business owners still have complexity, but a lot less.

Almost everyone wins or gets a lower tax bill from Uncle Sam. You may have heard or read that corporations (big and small) are big winners. They are as well as pass-through business owners (income is not taxed at the corporate level but “passes-through” to the owner’s tax return, e.g. S Corporation, LLC, sole proprietor, partnership). You may have heard or read that approximately 80% to 90% of individual taxpayers win. That is accurate. The tax breaks are not skewed toward the rich.

While we haven’t prepared tax returns for years I still have the skills (like riding a bike!) to calculate what this all means on a tax return. The only way you can review the interrelation of tax rules is to plug it into a spreadsheet (or tax preparation software when available for 2018). I caution, this is preliminary where the IRS has not provided guidance. I got my geek on and cranked the numbers on a handful of scenarios at different income levels and at different stages of life. I analyzed what the 2018 tax liability would be compared to 2017. The grid below shows the results. In the scenarios I ran almost everyone received a tax break under the new tax law. The biggest winners are parents from the increased child tax credit and business owners with the new 20% business deduction. Note: personal service businesses (PSB) such as doctors, lawyers, accountants, financial services etc. PSB’s with income < $158k Single and <$315k Married Filing Joint (MFJ) receive a lesser business income tax break. If PSB income is greater than these phase-out amounts they get nothing.

Even with lower state tax deduction and no Miscellaneous Itemized Deductions taxpayers still win. Yes, taxpayers can only deduct $10,000 of state income and real estate taxes but with the lower tax rates and minimal Alternative Minimum Tax (AMT) impact they still end up with lower tax bills. Significantly lower in many cases.

The new tax law was definitely written to incentivize hiring/job growth. Entrepreneurs are the real winners with the lowest tax bills. This should encourage business growth, both new businesses and existing ones. In addition, the new 20% business deduction has a nice twist. At higher income levels the deduction is limited to 50% of wages paid. If your payroll is low, your deduction is low.

BIG CHANGES WITH THE NEW TAX LAW (with some details)

The key, which we will not know for some time, is will it work? Will it prime the economic pump and create increased economic activity? This is such a political hot potato and so hard to prove. Both the Kennedy administration (early 1960s) and Reagan administration (early 1980s) proposed and successfully passed similar tax break legislation. The goal is to put more money in the hands of taxpayers and corporations to spend and invest. Will this happen? We won’t know for some time. Put best in this article by Neil Irwin of the NY Times – Do Tax Cuts Really Spur Growth? It Depends on the Details “Tax increases associated with productive investments can help growth, and deficit-financed tax cuts can harm growth,” said Chye-Ching Huang, who studies taxes at the Center on Budget and Policy Priorities. “Some people claim there’s a broad consensus that tax cuts are good or bad, but there isn’t one, because the question is too big. The answer to a question that imprecise is always going to be, ‘It depends.’”

I do know that they will have to curtail government spending. Let’s hope they do this in the right way, not cutting where the money is badly needed but reducing waste and needless spending. I do know that as citizens and business owners we have to focus on what we can control (beyond voting the bums out) and that is to invest in our futures. For business, it is simple – reinvest for growth and to create more jobs and revenue.

THE RESULTS ARE IN! 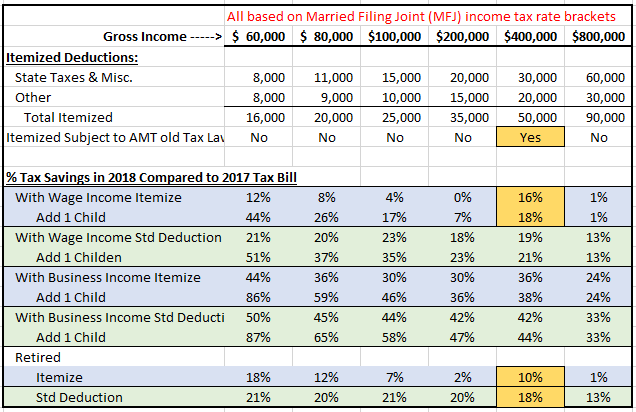 In my scenario the wage earners and retirees who itemize with $400,000 of income made out better than the other income levels. Why? Alternative Minimum Tax (AMT). In my scenarios this was the only group subject to AMT before the tax law change (2017). In reality some of the folks in the $100,000 and $200,000 income range are be pulled into AMT if they have higher state taxes and miscellaneous itemized deductions. The results on the chart for $400,000 itemizers proves the benefit of the reduction of those subject to AMT. These taxpayers benefit from no AMT under the new tax law as well as lower tax rates.

Parents can sock their added savings away in the expanded use of 529 plans! As you can see in the chart, parents really win with the new tax law. The doubling of the Child Tax Credit to $2,000 and increasing the phase out limit significantly to $200k Single and $400k Married Filing Joint (MFJ) is a SIGNIFICANT benefit to parents. Many more parents will share in this credit. Spend, rather save the money wisely! This tax credit supersizes the tax savings, especially in the lower tax brackets. The amount you get back is the same, but the percentage tax break is higher if your tax bill is lower.

The Politics of Tax Reform (ughhh!!! I have to get this off my chest)

I try to be free of spin. We all have our biases, but I think we will all agree this has gotten down right ridiculous! The folks we send to Washington are not states people looking out for our best interest, but partisans looking out for their own best interest and working against public interest. I know this has been and always will be the nature of the beast, but if Reagan and Tip O’Neil and Clinton and Gingrich could get along to pass legislation and collaborate so can the present politicians. For example, Democrats spent all their energy trying to stop this legislation. Legislation that they have been in favor of (corporate tax cuts) for years, according to Kiplinger Tax Letter. The same obstructionist BS went on when President Obama was in White House. He called for infrastructure spending for 8 years and the Republicans obstructed at every turn, but now infrastructure spending is a good idea?!? If you asked the economists that know what they are talking about, infrastructure spending, if done properly, has always been a good idea.

Being a life-long independent voter, I am so tired of listening to the spin. In this case, what this new tax law is and isn’t. I decided to avoid the hype and dig in myself to find out what was under the hood. Not what Paul Ryan and Chuck Schumer tell me it is or isn’t!

Side note; is there a market for a news outlet that provides news without spin? Old time journalism where they just read the news without opinion and picking and choosing which stories would sell more copy?!? I would personally pay for that service! It takes a lot of time to try to weed through the spin to find the facts. I never write about politics, but I felt that I had to express this after years of frustration over the spin whether it be taxes, health care, infrastructure spending… In this case I could do the research on my own. Of course I would do the research, I am a geek and it is my job to know this stuff!